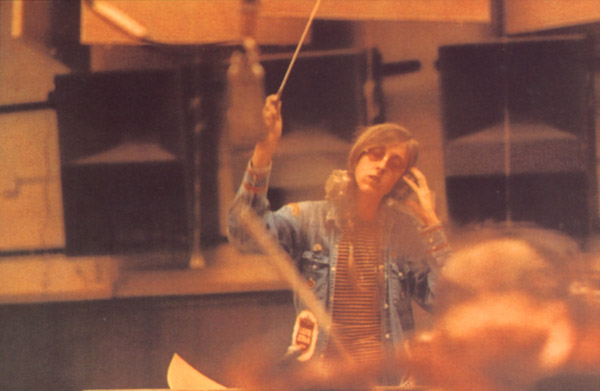 This document will tell you a little bit about the MP3 files that are available in this directory for you.  Those who are looking for the two commercially released Judee Sill albums will be pleased to hear that, for the present time at least, they are available from Rhino in a two-disk set called "Abracadabra," available at the moment only in the UK.  However, you can pick it up for a reasonable price from Amazon.uk.  (I think it's also available from Amazon's US site, but at a slightly higher price.)  Those are certainly the best place to start an exploration of her music.  Another album is now available which consists of rough demos she recorded a few years later for an album she never got to make.  The copyright holders for that release have requested the removal of those files from this site, which is why you can no longer find them here.  At the time I posted them, they were long-forgotten artifacts from a long-forgotten career, and no one much knew or cared about them.  Perhaps due to the existence of this site, they've been given a chance at a wider audience, and for my part in that, I have nothing but pride.

However, for at least the time being, I can still offer you these wonderful radio performances: 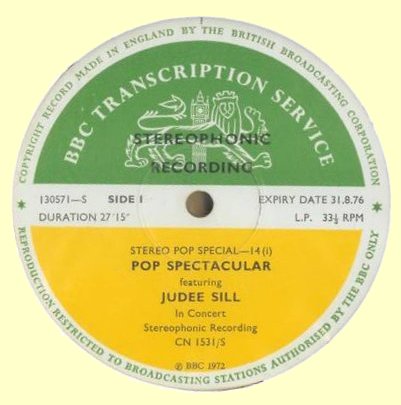 Thanks to Klaas de Jong, we now (4/4/05) have a very nice complete stereo copy of the transcription disk of the almost half-hour concert she gave at the BBC.  This was recorded on March 23rd, 1972, at the Paris Theater in London, and originally broadcast on April 1st, 1972.  (Thanks also to Brian Gari for his previous assistance.)  Here are the files:

1. Jesus Was A Crossmaker
2. Lady-O
3. The Lamb Ran Away With The Crown
4. Enchanted Sky Machines
5. The Kiss
6. Down Where The Valleys Are Low

MISCELLANEOUS OTHER BBC APPEARANCES, mostly thanks to Allan Allcott.  The audio quality of these ranges from poor to very good.

"IN CONCERT," BBC-TV April 1972.  Obviously, if anyone has actual videotape of this show (or better quality audio), I'd love to hear about it!  This was recorded from a TV speaker using a microphone, and so the quality isn't terrific, but I fiddled with the EQ and it's not as bad as you'd expect.

7. The Vigilante (there's an odd little noise about a minute into this file that I've cleaned up considerably since I originally posted this, so if you downloaded it before 4/8/01, you might want to snag it again.)
8. Lady-O
9. Jesus Was A Crossmaker
10. Enchanted Sky Machines
11. The Kiss
12. The Lamb Ran Away With The Crown
13. Lopin Along Through The Cosmos
14. Archetypal Man
15. My Man On Love

And two more songs from a 1973 "OLD GREY WHISTLE TEST" performance, one of which ("The Kiss") is commercially available on DVD in some countries.

26. Ridge Rider
27. Jesus Was A Crossmaker
28. Enchanted Sky Machines
29. Down Where The Valleys Are Low

And as a little bonus, from a private recording made in a friend's home, a song that should be familiar to all:

Hi Bob---I've been going through my ancient reel-to-reel tapes and my eyes bugged out when I saw this one song listed on a tape box. This was originally recorded on one of those old handheld portable cassette decks, the kind that sold for around $29.95 with a tiny little mic that was probably worth about a dollar, so the sound isn't spectacular but it ain't too horrible either. Apparently I transferred it to reel-to-reel tape soon after the concert.

Thanks so much for sharing this, Robbie!

I hope you all enjoy these with my compliments. I've gotten quite a bit of email asking me my involvement with Judee Sill and her music, and here's the story.  Back in 1991, I had the idea of putting together a one-hour radio documentary about her for NPR, which I eventually abandoned.  Many people have asked me why I abandoned it, and here's the short answer:

The more investigation I did, the more I realized that the best memorial possible to Judee Sill is her songs. It's a life that's frustrating to learn about in many ways, characterized by many strokes of just plain stupid bad luck, with some foolish decisions and carelessness thrown in for good measure. So, I think it's probably better left undone. She wrote some amazing songs, and let's enjoy them and leave it at that.

If anyone out there has any other rare recordings of Judee Sill (or cleaner copies of these), I'd love to hear them and add them to this repository.  Please email me at the address below.

Another persistent question is regarding "Tulips From Amsterdam," which is listed as a third album for Judee Sill in many databases and books.  There is no primary evidence that such an album ever existed.  When I was doing my research, not only was I repeatedly told by those who knew and worked with her that they'd never heard of a third album by any name, but that if such an album did exist, they'd have known about it.  I always believed that this bit of misinformation started with the All-Music Guide, but have recently discovered that it predates their existence, and appeared in a book called "New Rock Record" by Terry Hounsome, published in 1981, and is still listed in a database he continues to compile and sell.  I have contacted Mr. Hounsome, and here is his response:

"I have had the record reported to me by a user so i assume that they are correct.  It is difficult.  I have been told several times that records do not exist and in some cases i have them in my collection.  I am just not too sure about this one.  I have taken the record out of the database ready for the next version or update.  I can not see who sent it without going through hundreds of files and letter so maybe it is better to forget it."

Obviously, in the unlikely event that anyone has any evidence that there ever really was such an album, I'd love to hear about it.  Until then, I'll continue to maintain that it's either a clerical error or a prank.

On a completely unrelated bit of self-promotion, if you'd like to download or listen to my radio shows, check them out here.  I hope you like them!